Mt. Youteizan Hinangoya Refuge hut was rebuilt on October XNUMX, XNUMX due to the aging of the former refuge hut. At that time, the toilets were renewed and the first TSS soil treatment system (hereinafter TSS) was adopted in the mountainous areas of Hokkaido.

Mt. Youteizan Hinangoya Refuge hut facility outline, TSS mechanism, the number of climbers and toilet users in 2014 and 2015 were also reported in previous reports, so here is mainly the third year after the introduction of TSS The 2016 TSS usage and management status, the problems and advantages that we saw in the third year, and the future issues are entitled “This Year at Mt. Youteizan Hinangoya Refuge hut” I have been looking at TSS in the nearest place. For reference, the TSS drawing is shown in Figure 1 below.

2. Use situation of restroom

According to the Mt. Yotei Management and Maintenance Liaison Council (hereinafter referred to as the Council), the number of mountaineering in 2016 (Kutchan Course) was 3,653. In addition, the Makkari Course, the Kyogoku Course, and the Kimobetsu Course are currently being compiled.

I think that the toilet use situation in 2016 is almost the same as in 2015 even from the number of evacuation huts.

3. Management situation of the toilet

During the winter, we check the toilet and evacuation hut several times a season for abnormalities. In 2016, we went to the evacuation hut in March and April for checking.

From the 2nd week of June to the 2nd week of October where the manager is stationed, the toilet is cleaned every day. In addition, the Hokkaido Regional Environment Office of the Ministry of the Environment (hereinafter referred to as the “Ministry of the Environment”) and an inspection company inspect the TSS three times during the summer mountain season, fill in the “Inspection Record Table” and take a record photograph.

4. Reporting throughout the season

In the severe winter season of 2015, the toilet room and toilet interior were covered with frost. The cause seems to be water vapor constantly generated from the inside of the toilet. However, frost was not confirmed in 2016. The reason for this is that in 2016 the door for winter was damaged, and as a result, water vapor was discharged to the outside, so frost was not generated.

On July 6, 2016, the first on-site inspection was conducted by the Ministry of the Environment and an inspector. Odor is generated inside and outside the toilet. We put 8kg of rice bran (digestion tank 1st room). In the first digestive tank (directly under the toilet seat), contamination of sanitary products was confirmed. In addition, an Annonia odor is generated inside the toilet. There were days of irritation that made my eyes hurt at night. There was no abnormality in other inspection items.

August 12, 2016. There was a second inspection by the Ministry of the Environment and an inspection company. Odor is generated inside and outside the toilet room as before. Occurrence of maggots was confirmed in the first chamber of the digestion tank. In addition, there was an odor in the first and second digesters. The inflow of sanitary products was also confirmed as before. In addition, some exposure due to soil erosion was confirmed around the outdoor manhole frame (Photo 5). There was no abnormality in other inspection items.

On September 23, 2016, there was a third inspection by the Ministry of the Environment and an inspector. As usual, odors occur inside and outside the toilet. Add rice bran from the first chamber of the digester. There was water stagnant from the pre-filtration tank at the inspection port in front of the soil treatment equipment (if this is clogged, it cannot evaporate). Confirm that there is no foreign material (sanitary products, garbage, etc.) in the first chamber of the digester. This time, we have found used portable toilets and removed foreign objects as much as possible (photos of contamination in the first digestion chamber and removal work are shown in Photos 1, 2, and 3 below). There was no abnormality in other inspection items.

In addition, we received a suggestion from the inspection company to try putting water directly into the toilet every day as a measure to reduce odors, and water was poured (10-20 liters per time) during toilet cleaning.

5. Problems and benefits felt throughout the season

TSS of Mt. Youteizan Hinangoya Refuge hut tried in the disadvantaged environment of Hokkaido. The one I have honestly seen from the nearest place is "Isn't it generally functioning?"

Regarding “smell”, it seems that the problem has been solved considerably as a result of the implementation of “injection of water” by the inspector during the season.

In addition, we heard from the inspector that scum (floating sludge) is further generated by decomposition and covers the surface of the tank, which will lead to elimination of odors, but for now it seems that the possibility is low. (Since scum has almost never covered the surface).

As for the slight exposure caused by soil erosion around the outdoor manhole frame, there is a possibility that the function of the TSS will be damaged by damage from the soil, so I think that measures such as recharging the soil and protecting the digestion tank are necessary. I will.

After all, I think that the problem of dumping foreign objects (sanitary products, garbage, etc.) into the toilet by climbers is the biggest factor affecting TSS. TSS requires a lot of piping to purify the water locally. If these climbers are clogged with foreign objects (sanitary products, garbage, etc.) that are thrown into the toilet by climbers, their functions will be significantly impaired. TSS is considered to be a system that can be realized only by the “user morals”.

As an aside, there are times when I think that “this was good” that I saw in the third year after TSS started. First is the shape of the toilet. Mt. Youteizan Hinangoya Refuge hut's toilet is Western style and independent. Because the toilet seat is independent, the climber added the work while standing on the toilet seat with the climbing shoes, so that the next user was not dirty and could not be used, and was able to keep clean. In addition, it seems that the fact that the toilet is in the small room is one of the factors that keep the cleanliness from the advantage that the management side can easily clean and the psychological side of the user side.

6. Finally (such as future issues)

TSS is a sheep evacuation hut in a mountainous area that was the first attempt in Hokkaido. As I mentioned earlier, I think that it is generally good when viewed comprehensively (expenses, management, etc.).

The most important thing to make TSS work in the future is "improving the morals of the user's (mountainers) toilet". I think that the more this is resolved, the more TSS functions will be improved and the future will be brighter.

One of the odor elimination methods is the installation of an odor tower, but I think that it is necessary to consider this as a future issue.

Then, about “Combined use with a portable toilet”. Currently there is no toilet in the section from the starting point to the refuge hut, and a lot of excrement and tissue flowers are confirmed. I think this problem can be solved by using a portable toilet. The spread of portable toilets requires consideration of issues such as the installation of toilet booths, collection and incineration, and understanding and collaboration with the Ministry of the Environment and local governments. I think there is a great need to do that.

Also, I think it is necessary to continue regular inspections (TSS checks) as before.

If the Ministry of the Environment, inspectors, nature conservation groups, mountain managers, climbers, and all those involved work on these issues in the future, the mountains will become more wonderful, beautiful, and confident I think it can be passed on to the next generation.

◆ Confirmation of odor inside and outside the toilet room.
◆ In the digestion tank No. 1 and 2 rooms and preliminary filtration room, the generation status of scum (floating sludge), intermediate water, sediment sludge condition, water temperature.
◆ Soil treatment equipment that is located outside prevents top cover soil from sinking and evapotranspiration, and plant growth conditions
◆ Soil treatment equipment located outdoors that prevents sinking and evapotranspiration of the upper-cover soil, and the growing condition of plants.
◆ In the water tank, the status of water level, the status of transparency and the water temperature.
◆ Special note as other

Photo 5: Erosion around the manhole

Mr. Hideki Kondo has entered the 2019st season in 21 as a manager of Mt. Youteizan Hinangoya Refuge hut (a part-time employee of the Mt.

Regarding its appeal, issues and problems, prospects and future goals, Hideki Kondo contributed to the Ministry of the Environment's related magazine " Kokuritu Kouen (National Park) '' as " XNUMX-year-old Shikotsu Toya National Park at the turning point '' Has been touched.You can read the full text of your contribution here. 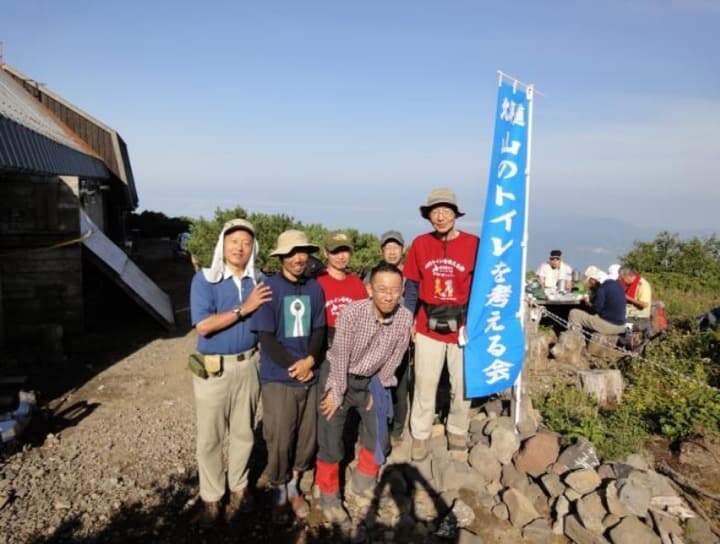 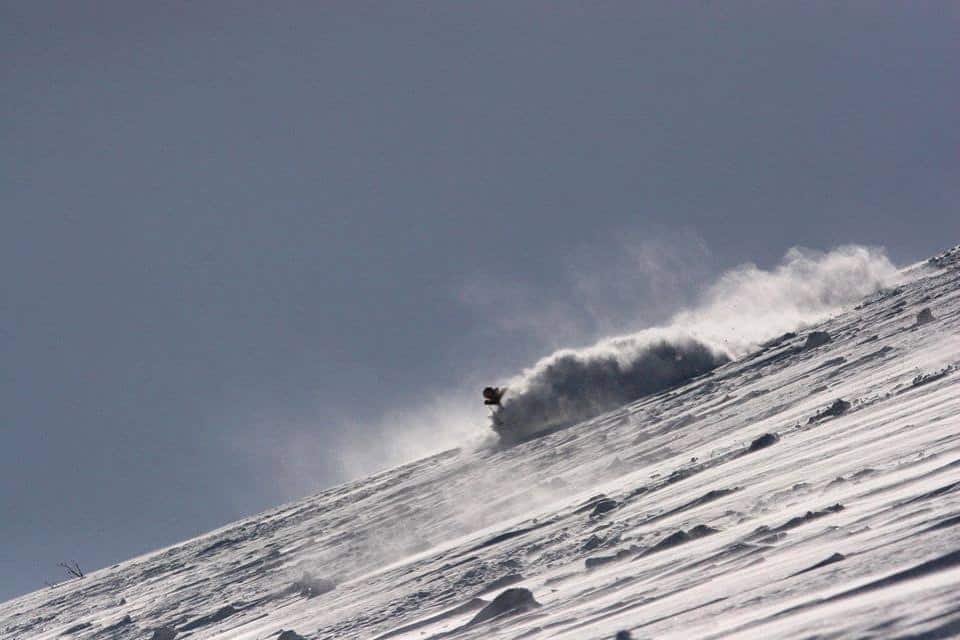